Know more about your Doctor 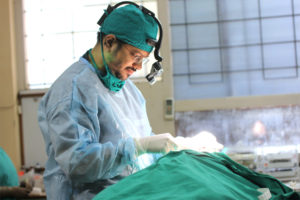 With an experience of more than a decade and around 1000+ surgeries in Rhinoplasty, he has published several papers at various national and international conferences and has also been an Operating Faculty at many National Conferences. Currently, he shoulders the responsibility of Executive Director at the M.I.M.E.R Medical College, Talegaon.

Rhinoplasty, being his primary interest, is a major focus of his educational and research efforts across the globe through lectures, paper presentations, surgeries and many more. He was awarded with the “Best Paper on Rhinoplasty” twice at the Maharashtra State Conference.

He is also on the advisory board of Indian Journal of Otorhinolaryngology.
He has also been interviewed on National Television as an expert surgeon, by Doordarshan and Zee Marathi

Dr. Virendra Ghaisas, with his experience and expertise in Rhinoplasty, keeps his approach completely patient centric and ensures that the patient is satisfied and happy with the new changes in appearance and also has an extra surge of confidence. He voices his honest opinion about the present structure of the nose and the estimated corrected structure taking into consideration, the entire face. Accordingly, the surgeries, as expected by the patients are tailor-made for fulfilling their specific requirements

To achieve this, he avoids over-aggressive resection maneuvers and focuses on maintaining structural support, seeking a natural and un-operated appearance. It is the As a result, the results are most natural looking.

He insists that Rhinoplasty, like any other surgery, is a science as well as an art, where success is based on perceptive judgement, knowledge and experience.

Our aim is to deliver natural looking results, taking care of the nose inside out, addressing the functional and the cosmetic issues effectively.

Check out some of the glimpses from 5th International Rhinoplasty Workshop 2019, Pune.